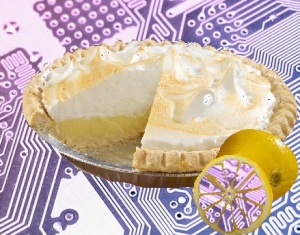 I’m not sure how to respond; I’m trying to figure it out, as I go along.  Lately life has supplied a bushel of lemons, and I’m familiar with the saying “When life hands you a lemon, make lemonade” but what I’d really like to know is how do I make it into a slice of lemon pie?

For years, I’ve been delving around on the internet trying to get published.  But working full-time and raising a family limited the time I spent and some sites that offered me a steady readership, PNN (defunct) and Yahoo, byline offered anemic compensation.

But I’ve also seen some succes.  There was a “Name Us” on-line contest, an experiment that went viral with international submissions.   I entered the name “Pxyl” and won.   The company has since been named to INC Magazine 5000 list, as one of America’s fastest growing companies, maybe there’s magic in a name.   I won a Kindle (I still have it) and they’ve mentioned my name a few times.

The MIT Age Lab in Cambridge, MA selected me to participate in a driving study.  I was exposed to new technology, and discovered that age does have its perks.   I was given the keys to a specially equipped vehicle, and connected by electronic leads to external computers, while video cameras mounted in the interior of the vehicle recorded me driving along the highway.    The data and my responses were gathered, collected and uploaded to a Cloud in real time.

The world is fast changing and I’m interested in everything!  This past August I was invited to Maine for a huge tech conference and saw first hand how the business IT landscape is changing.  And yes, I noticed that it was mostly men, so I was happy to write about the many doors that are opening for Girls Coding.   Meanwhile, the open platforms, the cost of processors (dropped) and the Internet of Things is real and it’s all rather amazing!

I’m a technician at heart.  My mind is trained to always approach a problem by getting on its good side, and the only dumb question, is the one that wasn’t asked.  So I started to ask questions on the internet to anonymous engineers.  I took a free on-line coding class, I read and wrote and realized I was becoming more and more unemployable.   Social media seemed appealing, so I decided to become a brand.

In April of 2014, I created a pseudonym, both tech savvy and internet friendly, named TechnyGal.  I started a blog, first on the WIX  platform and then here, on WordPress.  I opened a Twitter account and tied them to Facebook.  I purchased a few domain names Technygal.com and PinkisTheNewGreen.net  and then I started writing.

Two months later I received an email from the Washington Post Live, inviting me to a forum in Boston, I accepted.  The next day, I received another invitation to attend a 3 day conference being held in Boston, by AARP  50+ Life Reimagined.  I graciously accepted.

While seated at a Press only luncheon, I leaned over and confessed to an executive VP, that I had no idea of how I had gotten there and that I was humbled and overwhelmed.  She smiled and replied, “Just keep doing what you’re doing.”  So I have…

It’s been less than a year, and I’m thinking more and more of what direction I’d like Technygal to go in, and I’m thinking it includes girls coding, selling lemonade and getting bigger slices of pie.  But like I said, I’m not sure of how I’m doing what I’m doing, there’s just this steady movement always forward.

Your suggestions are welcome…

Where the Graphene Sneakers Are

“Run faster! Jump higher!” claimed an ad for PF Flyers.  In the 1950’s PF Flyers were the Holy Grail of footwear.  And we bought into the hype, as if wearing sneakers meant we’d be able to walk across water!

Ads convinced us that we could be play better and athletes like Bob Cousy, the basketball player endorsed them.   We were young and a boost in our confidence was like that “Magic Wedge” inserted in the Posture Foundation insole, it was a bit of a lucky charm.

Tire manufacturers found new uses for vulcanized rubber and literally, changed the way games were played.   Sports that required agility and sure-footedness benefitted from sneakers, and in a best case scenario of innovation gave birth to new businesses– sports medicine, physical therapy and fitness programs, which all owe their success to rubber footwear.

Recently, Nike the sneaker guru announced plans to release a new hi-tech power-lacing sneaker and I sighed at the mediocrity of the design.  Because power-laces sound fine when you’re having difficulty bending down to tie a shoelace, but they’re lame and not a worthy of the PF Flyer legacy.

New smart sneakers should exist.  They should be interactive and efficient; offering counter-balance on uneven platforms and compensation of traction on slippery slopes.  Wearers should be free of worry, and be exposed to minimal chances of twisting an ankle and no fear of a torn ligament.   In a Digital Age, hi-top or lo-top techie sneakers should come standard with GPS, as well as muscle pulsation that tones and data gathering processors, all in real time.

Is my idea worth talking about?   It is, if it generates thought.   Whether it’s a lively discussion of data, innovation or sustainability, who really knows, but we do use the task driven, all motivating, action word a lot — RUNNING.

We sure do a lot of it:  running programs, running Apps and running updates.

I’m reminded of a guy, who back in the early 1970’s was out wearing a tee-shirt, shorts and a pair of sneakers in Central Park.  Someone asked him, “What are you running from?”  He spun around and looked behind himself.  He half expected to see a mugger, someone with a dark cap on, lurking in the shadows of the overgrowth, but there was no one.   The question was repeated, “What are you running from?”

“A heart attack,” he replied and kept running.

Innovation is like that, transforming the mundane and making it loom larger than life.  I for one need a pair of hi-tech sneakers, something that makes me run for my health, not after it and I’d like for it to be worry free.

Oh and please let them come with a free shiny brass decoder ring; because that should be a part of the Internet of Things.

A Girl’s Journey Into The Next Lifetime

Truth is, long before finger swipes across a touch screen, I believed that cable technology would set girls free of gender limits.   That data was without bias and that even a glass ceiling had upside.

By looking up through it, one might pause and see one’s own image, and take stock of one’s progress… where you’ve been and how much further you might go.  And that assessment in a lifetime, if not yours would propel the next woman, if not now then in the next generation.

Women think like that, with interloped arms that both link them together, and allow them to stretch and reach into the future.  In some piggyback fashion, one generation steadily improves upon the next.   That’s how Boston’s cable training program came into being, female activists who themselves had passed their prime, haggled with city officials and politicians to create opportunities for young women like myself, that we could have a chance at gender equality.

First we became linesmen, as the city needed aerial distribution cables to feed neighborhoods, using lashing machines to pull lengths of cable through easements.   If you continued training, you might become an installer and then a technician.

But there were few positions available for women and departments were limited to how many women they could hire.  I was in the service department, with only three slots available:   one female installer, one female technician and one female engineer.

The manager didn’t hesitate to mince words, literally and figuratively, “It’s out of my hands.  There’s no more to be done.”  and the worse statement of all, “Don’t make me regret the hire.”

Ironically, being a female in a traditionally male job made passersby think that they could easily do your job!  We, women were constantly reminded of just how replaceable we were.   Sometimes that was enough motivation for me to dig my steel gaffs into the meat of the city’s telephone poles, climb up, do the work and to keep my job.

But I’ve known glass ceilings.  I’ve touched them, and was somehow comforted by their coolness on my fingertips.  Back then the cable industry was in its infancy and male co-workers, less qualified than I were quickly promoted and dispatched beyond grade, a reminder of how frail my position with the company was and it had been predetermined just how successful I would be; it tapered off at 35 feet, the exact height of a telephone pole.

Not even New England’s cold winters and snow blizzards could get me to stop climbing poles.   Especially during the Spring and summer months, when active equipment would need to be upgraded and whole neighborhoods would be without cable.   It was then that people cheered to see a technician’s truck.  I’d work and get the cable back on and it was a little heroic at times, or so it seemed.

Fathers would take their daughters by the hand and walk them across the street, where they’d wait for me to climb down from the pole.  Or they’d yell up and wave; then ask if I needed water.   On quiet days, when things had slowed, I’d hang around after the job was done.   Sometimes they’d invite me to speak to small groups at the YMCA or the Boys/Girls Clubs.  It was unscripted and impromptu, like hope itself.

I’d let them touch my gaffs and run their round hands across the leather linesmen belt.  The big metal D- loop and clasp would clang noisily, and I’d smile and hold it high.  Grand posturing, like a boxer before a championship bout.

I too, had grown up in the city.  And there I stood in my linesmen boots, living proof that a city gal could climb up from poverty on a telephone pole; it seemed noble.  And they seemed to see other possibilities for themselves, if not in this generation well then surely in the next.