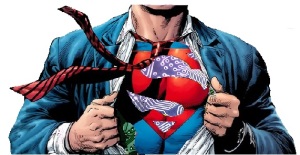 Heroes, where would we be without them?

Not every hero has a cape, or a super power.  We know this, because over millennium our heroes were depicted in mythology and in rituals without suits of armor. Their one common denominator was in assisting mankind to get along in this journey of life.  A task that continues to be plagued with perils, some self-imposed and others, calamities of nature.

The power then, as it is now, is “Hope”, embossed with faith and sprinkled with self-discovery, that each burden is itself an exercise of endurance. Strengthening not only our muscles, but our resolve that is then carried over from one generation to the next. As if determination and cooperation were progressive strands of DNA, adding meaning and validating life itself.

Our technology has done that, made it sweeter, by adding comforts and lifting us up, literally. Whether we’re in an elevator or on an airplane, technology has been that superhero and established our worthiness.

And our stories, passed along in the oral tradition or in written form help to further the legends. It’s the art of storytelling, embellishing the truth and creating the rite of passage and instilling the hopefulness “if he could do it, then she can too”.

Sitting around a camp fire further connects us with the ominous, while yes there is darkness there is also light.  That we have the ability to create fire. We must be thoughtful and mindful, because there is an inherent weakness to reckless behavior — which too often harms our development and the hero within.

The truth is, human development has not changed from ancient days to this one; not one iota…

So we need our storytelling to focus on other aspects of life, such as love and frailties.   We like our literature, from Chauncer to Shakespeare to depict our better more civilized selves with consequences.   These remain relevant from generation to generation, mostly because heroes aren’t limited by time or the imagination.

But we are.  Time is not our friend.

Lately, I’ve realized how empowering a pair of eyeglasses can be, as time had weakened eyeball muscle and dried tissue.  My once keen eyesight strained to read my printed words, until Whoosh! Technology swooped in!  It did so without prejudice, bias or judgment.

My eyeglasses never once asked my gender, or my age or my race!  They just did the task they were created to do,  that is they assisted me in seeing the world again.   The images weren’t distorted and the outlines weren’t vague.  That’s what technology does!

I’m excited about Wearables and the Internet of Things, they’ll have tremendous power.  Even passé technology, those that came in with great anticipation and petered out, like Googleglass and Segway will have a great come back!

I’m reminded that a superhero doesn’t have to wear a cape, but if it fits..

Times have changed. We live in a world of logos, marketing and branding. There’s no veil that separates the contrasts between poverty and prosperity. No filter to block the wrong from the right, or the ego from overpowering the id.

We need our heroes, flying is highly desirable, but we’ll take walking ones. The every day kind of hero that looks like you, or me or she… Who sits and eats with us. Our heroes can be basketball’s slam dunkers, baseball’s home run sluggers, teachers or marathon runners.  They can be businessmen, religious men, Olympic swimmers, exotic dancers or cancer survivors.  (More of the latter please.)

The point is, we need heroes, because I’m growing old and I can’t fight all these bad guys by myself.

Technology chugs along at a nice clip, and like passengers on a train we’re part of its movement.

Whether we’re ready or not, it forges ahead as if on some imaginary track, intersecting industry and connecting communities and countries, seamlessly. Stops along the way allow people to embark and disembark in a whirlwind of economic supply and demand. There’s a transparency that allows growth and it seems, as we proceed ever onward, on schedule.

Technology has no motives.  With proper instructions, it’ll be efficient in most hands.  From invention to innovation and back again, beta mode or syntax, technology works to make life easier, better.  But we’re nearing the frontier’s edge, the area where we must switch tracks and become something more than fun.

We must anticipate and identify issues that are adverse to the human condition, things like age and climate change on a global scale, require attention and technology that will resolve, improve or at least redirect energies for the better good.

The Digital Age, like the Industrial Age and all the ages before, marked by Periods– Neolithic, Mesolithic, and served on tectonic plates have such a  huge impact on life and on earth. Some of the growth is sustainable and sadly, some of it is not.

While some rise, others fall and it seems some malady or some catastrophic event might happen, like factories with no fire escapes.  So doesn’t it just make sense that legislation is put in place?

Think Google Glasses, modified that we might see what’s up ahead, around the bend, coming fast… why not?

We are, after all an aging nation. Dementia, senility and frailty are part of the human experience and we need to develop technology that addresses these issues, as people get on and off the train.

It makes me think of Lionel train sets, those miniature replicas of locomotives zooming around curves and not falling off the track, because they were engineered and properly weighted down to stay on track.   Watching them being remotely controlled with an electric transformer, going forward, reverse and at variable speeds.

In 1959, psychologists wrote that “…a child who controls a Lionel train today, will control his life tomorrow.”  I see technology like that and most definitely, I see it including girls… “All aboard!”