There are so many different perspectives in the world, how can they all be right and mine be wrong?

Not so long ago, my life changed, it was a catastrophic event that stopped me from pursuing my dreams.  And when it was over, everyone’s opinion of me was minimized:

My life has always been more than just breathing.  My best use practices with air included running and sailing, as well as the hard work, dedication and socializing, in equal parts.  I was a Jackie of All Trades, from slinging a hammer to climbing a telephone pole and I liked it.  And of course there was wiggle room, my mistakes were lessons and I self-corrected and moved on.

I had started my TechnyGal brand, and unlike thousands of other people on the internet, I had discovered a way to monetize social media with zero investment!  So, my ROI (Return On Investment) was always growing.  I was invited to conventions, symposiums and was asked to be interviewed.  I was on conference calls, doing business with companies in the UK and here in the states.  And I was writing, it was the other love in my life, which I had put off to raise a family.

So, when the doctors told me that I would live, I was confused.   It wasn’t my standard of living, what I had become accustomed to, but some version of “Good enough”, their definition of what my life would now be.

Today, I’m reminded of my former self, before I got sick.  When I could walk, talk and run free… just rambling along like Fridays.

I came up with the idea, while watching a television show on NBC called This Is Us .  The show depicts the fictional Pearson family by moments of insights, refreshing unconditional love and filtered perspectives, some done via flashbacks and hindsight as to how they grow into themselves.

It’s a vignette slice of our society, served in proper proportion by the clever use of interracial triplets, that’s both entertaining and relatable.  From male to female to Caucasian to African-American, we are all Americans.  We share the same concerns, have the same overweight issues, and abuses we read about.

Maya Angelou wrote that we are more alike than we are different, think about that and then understand… there are millions of people with different opinions and none are more important to you, than your own.

I was told that I should be happy that I’m alive.  I struggle with that…  Of course there are moments when I’m happy, but also moments when I’m sad.  It’s difficult to not experience self-pity, after all I’m deaf in one ear, can’t walk without assistance and can’t pick up the work pace that I started.  But I’m told that there’s a good chance that my disease will go into remission, and like all people we do better when we can be hopeful.

I’ve started Rambling as a way stay motivated, to just keeping going… On & On.  What’s your motivation? 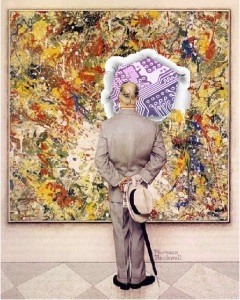 Ever wonder if people gathered around cave paintings of elk, and appreciated the lightness of the artist’s brushstroke?

Um, no.  Me either, most likely, people stared at the painting and devised a thought, how to get the elk.  Survival in those times of darkness, fueled by fear and hunger, required creative imagination, a thought.   What to use and how to make a tool, the precursor of our modern technology.

From sharpened flint stones to steel to the Digital Age; the spark of an idea fed our ancestors, sheltered them and eventually helped us to defy the laws of gravity.

The really great technology creates an entire ecosystem, like bees pollinate flowers.  One thing leads to another, to another…  from transportation to education to healthcare.  And just as the flower needs that honey bee, inventive technology needs creativity.

Without creativity there would be no inventions, and without innovation our inventions would become stale and cracked.   Like rubber, first used for automobile tires, until innovation came along and used it for a sneaker.  That got us up and running; jogging for a healthy heart, which led to better health awareness, which led to a fitness economy that continues to boom.  Why else are we wearing Fitbits?

There are a lot of people in this world who are extremely good at inventing things, call them scientists. But that doesn’t make them good at identifying alternative uses for their inventions. People who are good at designing mechanical things, call them engineers aren’t necessarily good at marketing their designs.   But a graphic artist helps and just like that, so on and so forth, one person to another to another, and social media helps.

Sometimes we’ll see a line of people standing in a museum, staring at a painting.  I wonder if they see technology?

Art calls on our imagination, we become transfixed.  Studying the way light dances across the canvas, a thin line made from a sable hair paint brush.   Still art, the artist’s own tools in shadow, her palette held at an angle… A heavy dotted pink chrysanthemum and her perspective of a bumblebee’s wings moving, barely there…

I wonder…  without art where would we be?