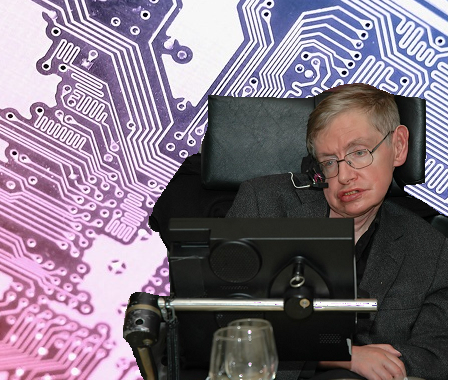 I was just thinking, had Stephen Hawking been a Rock & Roll musician, he would have had R&B crossover appeal!   Because there’s a little baseline funk attached to his classical theory.

Yesterday, Stephen Hawking died.  I did not know him, but like so many others, I benefitted greatly from his scientific discoveries and more recently found solace in how he lived his life in a wheelchair, unable to move after having been born with functioning limbs.  He was 21 years old when he was diagnosed with  amyotrophic lateral sclerosis (ALS)

It is hard to imagine what it must be like to no longer be able to run, chew or walk up to the ocean and feel it teasingly lap at your ankles.  And I think how strong of a man he must have been to survive the anguish, the self doubt and self-pity.  His family must have had an exceptional capacity for love, the great lengths it must have taken to support him, his spirit and his brilliant mind.  We can’t know…

But technology didn’t fail him.  It allowed him to communicate with the world and to share his knowledge of the universe.  He brought physics down to earth, so that even the layperson could appreciate theories and wonder about the universe and our role in it.  We understand so much more now, than we did when I was growing up, back then no one spoke of quantum mechanics and classical physics in high school.

But this man got us talking about black holes and because of that, most of us now understand that a black hole exists in space and acts as a vacuum.  And even more of us understand that scientists are challenged daily, to find a compatible way to describe the motion of large bodies in the universe and the motion of the tiny particles in the universe, as the tiny particles make up the large bodies.

The fact that so many every day people now understand our physical world is due to his impact.  Television shows like Star Trek and movies like Back to The Future, acted as a pipeline from Stephen Hawking’s brilliant mind to typewriters and made fictional accounts of time and space more plausible.

It worked.  It got so many of us hooked on science, on astronomy and technology… all the wonderful advancements that we’ve made and continue to make are in great part due to Stephen Hawking.  He was a super hero in the scientific world and even in my less geeky world.

The fact that he passed away on National Pi Day doesn’t seem like a coincidence.  To me, it seems accurate and precise, like his science.  And now, Stephen Hawking is superman flying around in an eternal state of bliss.  Rest in Peace.  Thank You, Sir.